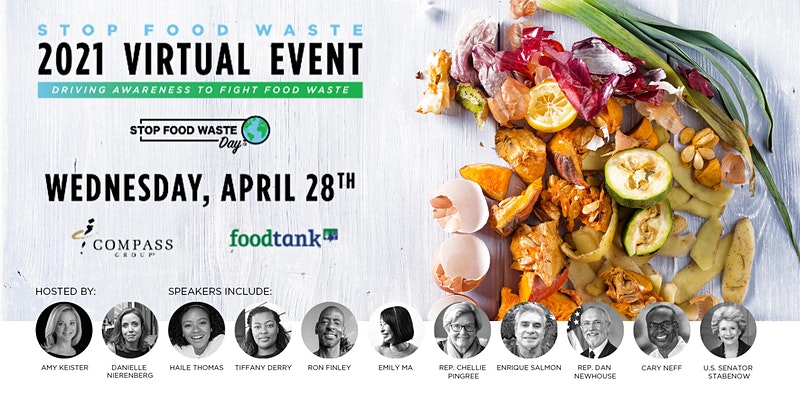 Register now (FREE) and join us as we commemorate Stop Food Waste Day on Wednesday, April 28th, with an incredible event featuring more than 25+ luminary leaders discussing the importance and offering solutions in how we solve food loss and food waste.

Brought to you by Food Tank and Compass Group.

Confirmed speakers include (alphabetical, more to be announced each day):

Chef Lorenzo Boni is the Executive Chef for Barilla America.

Jean Buzby is the USDA Food Loss and Waste Liaison.

Rocky Dawuni is a Grammy-nominated musician and UNEP humanitarian.

Tiffany Derry is an American well known for her appearances on Top Chef.

Dana Gunders serves as the Executive Director of ReFED, a food waste nonprofit.

Sam Kass is the founder of TROVE and former White House Chef and Senior Policy Advisor.

Debbie Stabenow, Chairwoman of the U.S. Senate Committee on Agriculture, Nutrition, and Forestry.

Haile Thomas is a Chef and Wellness + Compassion Activist.

Emily Ma is the head of Food for Good at Google.

Danielle Nierenberg is the President of Food Tank.

Jon Utech is the director of the Office for a Healthy Environment at the Cleveland Clinic.

And many, many more to be announced very soon!