The Power of Carbon Farming to Mitigate Climate Change

Agriculture accounts for 15% of global emissions, and carbon farming practices such as composting, cover cropping, and rotational grazing have significant potential to start reversing that number. Project Drawdown has shown that carbon farming or regenerative agriculture practices are the 11th most powerful tool in humanity’s tool kit to mitigate global warming.

As of this writing, 151 companies have committed to implement these practices through the Climate Collaborative. Many of those companies are struggling with how to engage farmers in their supply chains to begin a shift toward adopting carbon building practices. This is, in part, because while the climate case is clear, the business case is still being developed.

After years of following and benefitting from its carbon farming plan developed in partnership with the Marin Carbon Project, Albert Straus observed a variety of positive environmental and financial impacts on his own 500 acre dairy farm. However, Straus held the desire to multiply carbon farming’s positive climate impacts at the dairy farms in its supply chain and beyond.

According to Joseph Button, Straus’s Sustainability Director, “We knew that if we wanted to help our dairies integrate more carbon farming practices, we would need to prove that a shift in management would not only help the health of soil, but also help the financial bottom line.”

To build the carbon farming business case, the Straus team analyzed how carbon farming practices impacted pasture yields and the related need to purchase inputs or feed. The recently released findings clearly demonstrate that these practices lead to dramatically improved soil health and greater forage productivity that cut feed costs by about $100 per acre annually.

Read on to find out how Straus went about building their business case—including outreach to scientists and use of satellite imagery!

As Straus thought about what could make a financial case for carbon farming, the benefits of a closed-loop system came to mind. Ideally, a truly regenerative system would reduce the need to purchase external inputs, as it could supply more of its own inputs (i.e. grass, compost, feed) in a “closed-loop” system. Hence, the team turned towards examining which practices would contribute to increased biomass on producers’ grazing fields. Increased biomass means increased forage (grass, etc.), which means lower external feed costs. 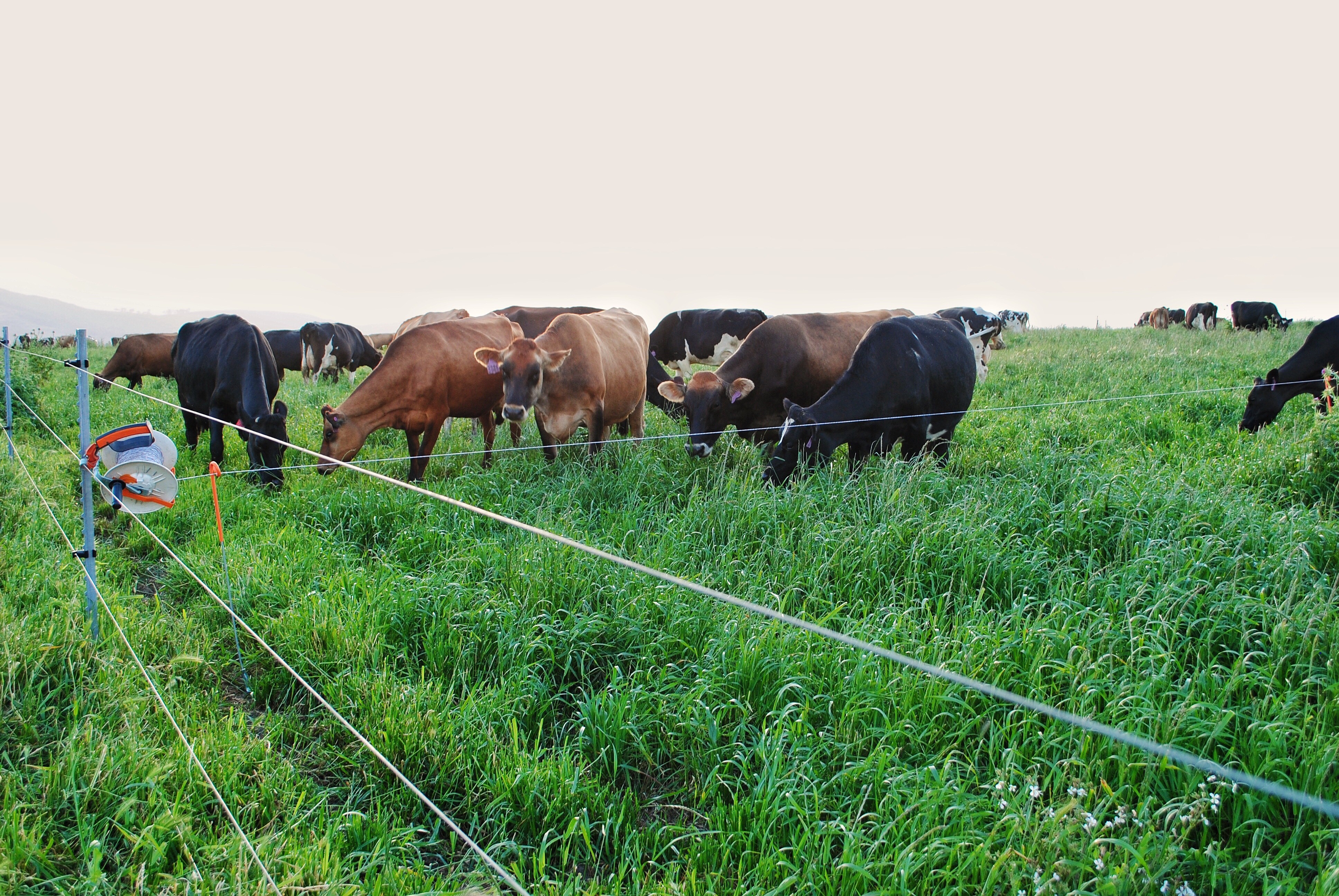 Straus focuses on two main ranchland practices to identify how, if at all, carbon farming methods could help farmers save money:

To calculate how much forage biomass had increased during peak season as a result of compost application, Straus first needed to obtain a reliable biomass baseline for their pastures. The challenge? Establishing that baseline since a biomass measurement had not been taken prior to the compost application.

To address this challenge, Straus learned that they could use historic satellite imagery of pasturelands to help establish a correlation between peak biomass growth and the NDVI (normalized difference vegetation index) color of carbon-farmed fields from the satellite images.

Through the network developed from the Marin Carbon Project, Straus contracted Chris Potter, a scientist with a specialization in remote satellite sensing systems, to help develop a methodology around this premise. The methodology leveraged and compared information from satellite imagery, and its correlation with grass dry matter weight measurement data collected in recent years by Whendee Silver, a UC Berkeley soil scientist. The formula developed by Chris Potter outputs very high quality estimates of forage biomass that closely match on ground hand measurements.

With this formula in place, Straus began the work of analyzing historical satellite images. The data was organized into three different sets of information:

As the data rolled in, Straus started to see the numerical benefits of compost application.

Before and After Yields of Fields that Received Compost Application 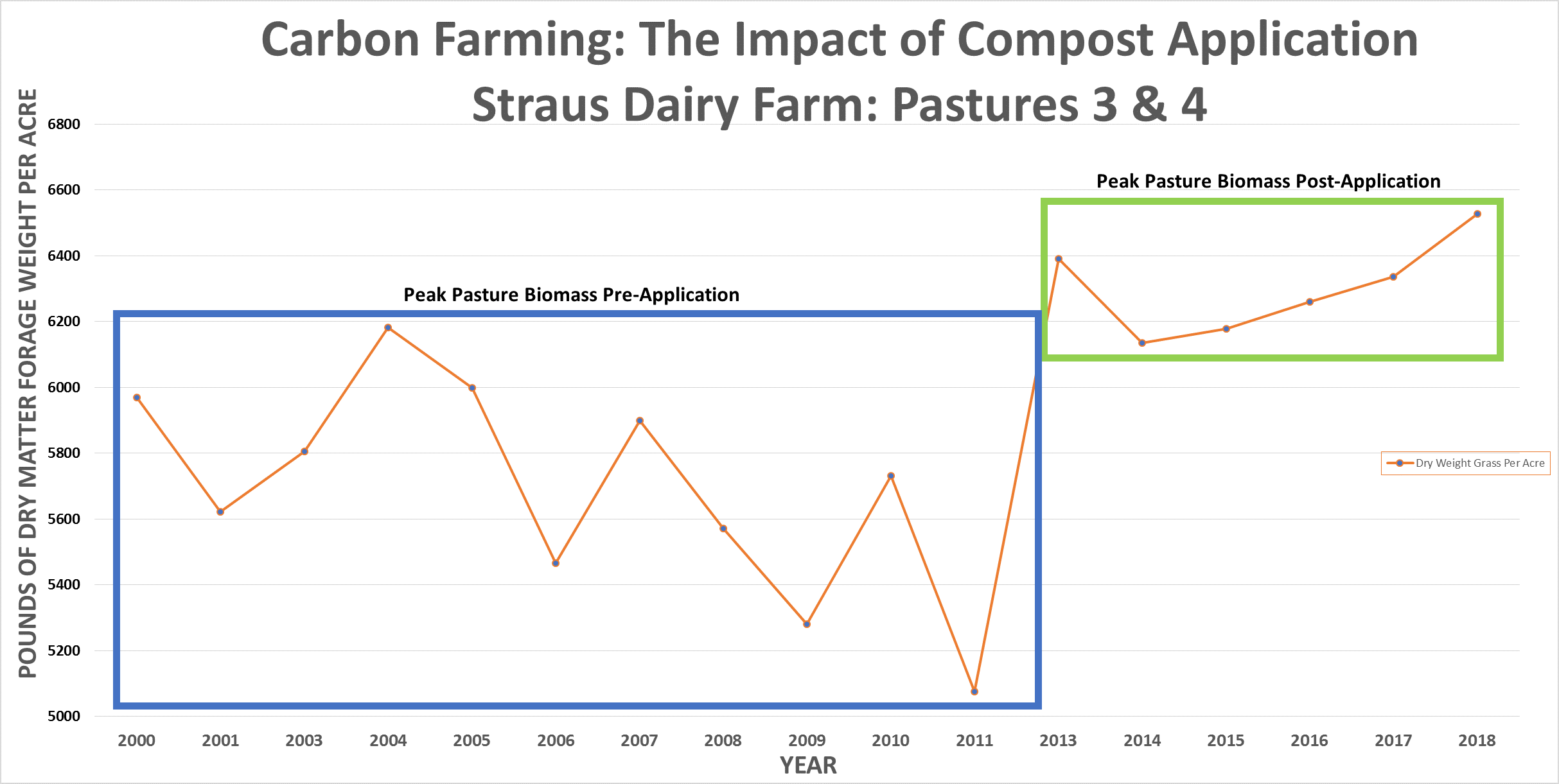 Straus also compared peak biomass growth trends (figure 3 below) between fields that did and did not receive compost applications in 2013 (additional Straus pastures have received compost amendments since 2013). The comparison clearly shows that fields receiving compost had an average of 4% higher biomass yields—translating into up to 600 more pounds of forage per acre! More importantly, the carbon-farmed pastures experienced a trend breaking forage yield difference compared to the rest of the ranch.

What do these trends mean? As they looked at the results, the standout benefits of composting and rotational grazing became clear:

The results from this study are currently under review by Straus’s supply chain partners; in the future, Straus hopes to continue to quantify the benefits that carbon farming practices are bringing its dairy partners.  The initial reception has been positive and future plans include:

Straus Family Creamery has been family owned since 1994. Consistently an innovator in the dairy space, they were the first 100% certified-organic creamery in the United States! Today, Straus produces 100% organic-certified products, including milk, cream, yogurt, sour cream, European-style butter, and super-premium ice cream. The raw ingredient—milk—used as the basis for all of these products are sourced from twelve family dairies located in Marin and Sonoma counties.